Exams can be tough. 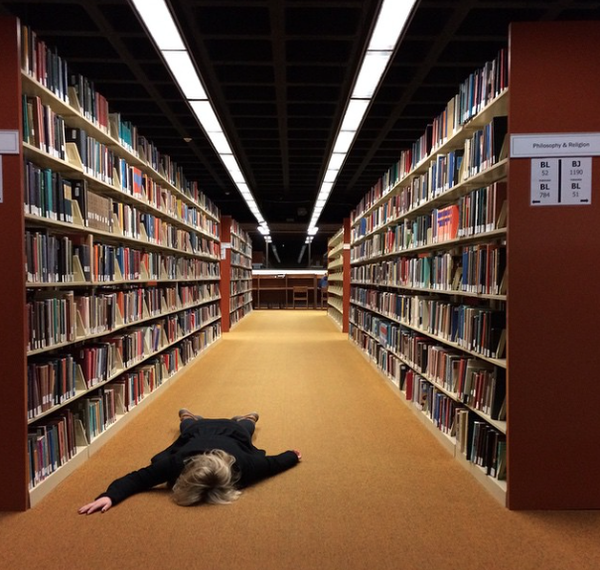 ‘Tis the season for the Washington and Lee University Library to actually close for a few days.  See below for details.  Happy Holidays to all — especially W&L students!

Sometimes a guest speaker does such a great job that you have to invite him to come back.

Actually, he’s more of a listener than a speaker. Meet Duncan, the stress-reducing canine.

Because of popular demand, Duncan, a certified therapy dog with Therapets of Roanoke Valley, will be making another house-call in Leyburn Library this Friday 12 December. Look for Duncan and his handler in the Writing Center on the Main Floor from 2:00 to 4:00 Friday afternoon.

Although he’s not much help with term-paper extensions, he will lend a sympathetic ear. Stop by and tell Duncan all your troubles.

[Credit where credit is due: The above artsy photograph was taken by professional photographer/educator/alumna Shaun Devlin.]

‘Tis the season for papers, exams, and energy deficits.

Need a break?   And some carbs and some sugar and other beneficial food groups?

W&L’s Active Minds and University Peer Counseling will come to the rescue on the evening of Thursday 11 December from 8:00 to 9:00, providing free snacks on the Main Floor of Leyburn Library.

Washington and Lee Reynolds Professor of Business Journalism Pam Luecke will present a brief talk on the recently-announced winners of the Nobel Peace Prize in Northen Auditorium on Thursday 11 December at 12:40 pm.   Light refreshments will be served.

The 2014 Peace Prize was awarded jointly to Kailash Satyarthi and Malala Yousafzai “for their struggle against the suppression of children and young people and for the right of all children to education.”   For more information, see this New York Times article.

Laura Hawkins of Oxford University will give a lecture on “A Writing Revolution: How and Why Writing Spread in the Ancient Near East,” on Wednesday 10 December at 4:30 p.m. in Northen Auditorium in Leyburn Library.

The lecture is free and open to the public. After the talk, Tim Lubin, W&L Professor of Religion, will discuss “Writing Eastward: from India to Borneo” in a brief afterword.

Hawkins, a doctoral researcher at the University of Oxford in the Faculty of Oriental Studies, will begin with an overview of cuneiform writing, showing how the signs acquired syllabic phonetic values, a characteristic which may have been important in the script’s adoption throughout the ancient Near East for use in a variety of languages. She will offer some conclusions on why cuneiform was such a successful technological innovation in the region.

Lubin will pick up the thread in ancient India, where a new script, probably inspired by the one used for Aramaic, was designed to publish the edicts of the Emperor Asoka in Magadha Prakrit. This script, also a type of syllabary, subsequently spread across South and Southeast Asia, being adapted to write texts in many different languages, for many different purposes.

Northen Auditorium in Leyburn Library will be the site for a talk about “Humane Management: Apparel Brands and the People that Make Our Clothes” on Friday 5 December at 5:00 pm.

The presentation features Ed Soule, Associate Professor at the McDonough School of Business, Georgetown University.  His teaching and research draws upon his business career (CPA & CFO) and his training in moral philosophy. He publishes in areas where morality intersects management, corporate strategy, and regulatory policy, and he teaches courses on managerial ethics, corporate social responsibility, and leadership.

This event is co-sponsored by the Williams School of Commerce, Economics, & Politics and The Roger Mudd Center for Ethics, and is free and open to the public.

Debra Prager, Associate Professor of German at Washington and Lee University, will speak about her research at an author talk and reception on Thursday 4 December, beginning at 5:15 pm.

The topic of Professor Prager’s talk will be “Orienting the Self: The German Literary Encounter with the Eastern Other,” which also is the title of her recently-published book.

The event will take place on the Main Floor of Leyburn Library and refreshments will be provided.

For Washington and Lee students —

Are you interested in summer abroad opportunities for research, internships, or service learning?  Do you wonder where to start?

This Tuesday evening from 7:00 to 8:00 pm current W&L students who had 2014 summer internships, research or service learning abroad will participate in a poster presentation documenting their experiences.  The presentation and discussion will take place on the Main Floor of Leyburn Library.

Topics in include individual projects, internships hosts, how and when students secured their positions, and whether they had financial support.   Each internship and country experience is unique.  You are invited to come ask questions and discover the possibilities.