This sounds like a job for the Oxford English Dictionary.

The OED is the boss of English language etymological dictionaries and its researchers not only track new scholarship on dusty old words, but also keep an eye on the appearance and development of new words which are finding places in our discourse.   And sometimes these researchers are able to document the development of a term from a self-conscious creation, such as in this essay on the now-familiar “Brexit.”

“Brexit” is but one of about 500 new entries in the Oxford English Dictionary this December and you can see the complete list on this update page.  For more on “hackery” and “tombstoning” and their comrades, current members of the W&L community may use the W&L University Library’s link to the OED.

Merriam-Webster Unabridged , available online to the current Washington and Lee University community through the University Library, usually is considered the most comprehensive and most respected dictionary of the modern English language.

Each year the Merriam Webster editors identify a particular word or term as the official Word of the Year, an exercise also enjoyed by other dictionaries, newspapers, magazines, and anyone else with opinions about the English language.     Some of these selections are made subjectively, while others involve  quantitative methodology.    (For evidence of the variety, have a look at this list of articles on the subject, taken from the Academic Search Complete database.)

Merriam-Webster Unabridged routinely keeps track of the number of online queries made in its database, displaying lists of searches in the past 24 hours and in the past 7 days.   The natural outcome of this data-gathering is a Word of the Year, indicating the most looked-up word in the calendar year — and the editors are a bit alarmed about how this is playing out in 2016.

The Guardian recently reported on Merriam-Webster’s concern that the word “fascism” might be the top search in 2016, even going so far as to suggest other words readers might want to search.   If you want to follow this controversy, the Merriam-Webster Twitter site is worth a follow.     Or just keep an eye on the Merriam-Webster Unabridged homepage. 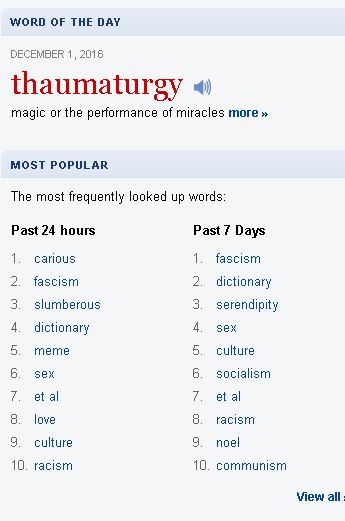