Christopher Nolan’s new film, Dunkirk, is making quite a splash as an unusually serious “summer movie.”   Many commentators, especially in the UK, are finding it useful to compare those events and that spirit to the contemporary Brexit controversy, as witnessed in this harvest from Google.

Washington and Lee researchers have the ability to look at contemporary accounts of Dunkirk through a number of resources, perhaps most importantly through the coverage of that preeminent British newspaper, The Times, via the University Library’s subscription to the Times Digital Archive.

Current W&L students, faculty, and staff may utilize the database’s “Browse by Date” option to examine individual issues of the newspaper from during the height of the 1940 Dunkirk crisis, 27 May – 5 June.   Of course, it also is possible to search for the word Dunkirk, but that is likely to miss quite a few germane articles, such as this one from 1 June 1940.

Despite the dramatic events happening just off the English Channel shore, a modern researcher cannot help but notice that other aspects of life in 1940 England are continuing as before.   For example, as one can read, in the midst of the Dunkirk fighting and rescue, over 30,000 were in attendance in London to see West Ham defeat Fulham 4-3 in a football/soccer match leading up what was billed as the “Football League War Cup Final.”

Other contemporary accounts from British and American newspapers are available to W&L researchers from the University Library’s Newspapers and Magazine Databases collection.   If you have questions, please feel free to contract Dick Grefe, Senior Reference Librarian.

To authoritatively answer this and other enduring questions, the Washington and Lee University Library recently acquired online access to what one scholar has referred to as “the greatest American lexicographical project of the latter 20th century,” the Dictionary of American Regional English (DARE).

As the title implies, DARE focuses on that rich and raucous sub-set of English sometimes known as “American English.”   This digital product inherits and builds on the decades-long work which gave birth to the six-volume printed set, the first volume of which appeared in 1985 and which the W&L library owns in its entirety.   DARE does not dare try to explain all known words in the English language and is not intended to be comprehensive in its coverage of English words used within the confines of the United States.   Its scope is much narrower, as stated in the Introduction to the original volume:

The research contained within DARE actually began in the 1880’s, with the founding of the American Dialect Society.   Most of the material, however, was gathered from 1965 to 1970 as fieldworkers (mostly University of Wisconsin graduate students) gathered about 2.5 million survey responses from communities across the U.S.   Newer material is grist for the database, even as the publication struggles to cope with draconian budget cuts in the Wisconsin higher education system.    For more on the history of the project (to 2011), see this article from Humanities: The Magazine of the National Endowment of the Humanities (irony?).    More recent information on the precariousness of the project’s funding can be found in this article from the Chronicle of Higher Education.

Other media outlets, scholarly and otherwise, often mine DARE for stories, such as a piece from Mental Floss on colorful synonyms for the verb vomit.   (Yes, “ralph” is in the house.)   More scholarly uses abound, as in this article on Emily Dickinson, and Google Scholar can harvest boocoodles  of applications.  And as the Wall Street Journal pointed out,   “DARE has even been used to solve crimes.  Roger Shuy, a retired forensic linguist, recounted the case of a child abduction in which the kidnapper left a note demanding ransom of $10,000, directing:  ‘Put it in the green trash kan on the devil strip’ at the corner of two streets.   The kidnapper tried to disguise his education with “kan” (elsewhere spelling “precious” correctly), but “devil strip” is a term for the strip of grass between the sidewalk and the roadway, one used solely in a small area around Akron.  When law enforcement’s suspect list included just one educated man from Akron, the police got a confession.”

And if you like the sound of regional/local accents…  One delightful aspect of the 1965-1970 fieldwork was securing audio of over 1,300 people from communities across the country, each reading the same brief story, “Arthur the Rat.”   You can generate links to about 1,382 of these recordings by going to this site, clicking on  “Search the Collection” on the left side of the page, and then entering “arthur the rat” (including the quotation marks).     If you want to focus on a particular area, you can narrow the search, such as “Arthur the rat” AND Virginia.    (There is one item from a 72-year-old white male in Lexington, Virginia in 1968!)

I could go on.

The DARE site is a multi-faceted research tool, with lots of fascinating content, but is hampered by a somewhat byzantine organization (perhaps leading to confusement) .   They are working on it.   The entire database is available to current W&L students, faculty, and staff from both on-campus and off-campus locations.   So, experiment and explore to your heart’s content — it may be the perfect thing to do on a hot summer day, as you listen to the chitterdiddles outside.   If you have questions, contact Senior Reference Librarian Dick Grefe. 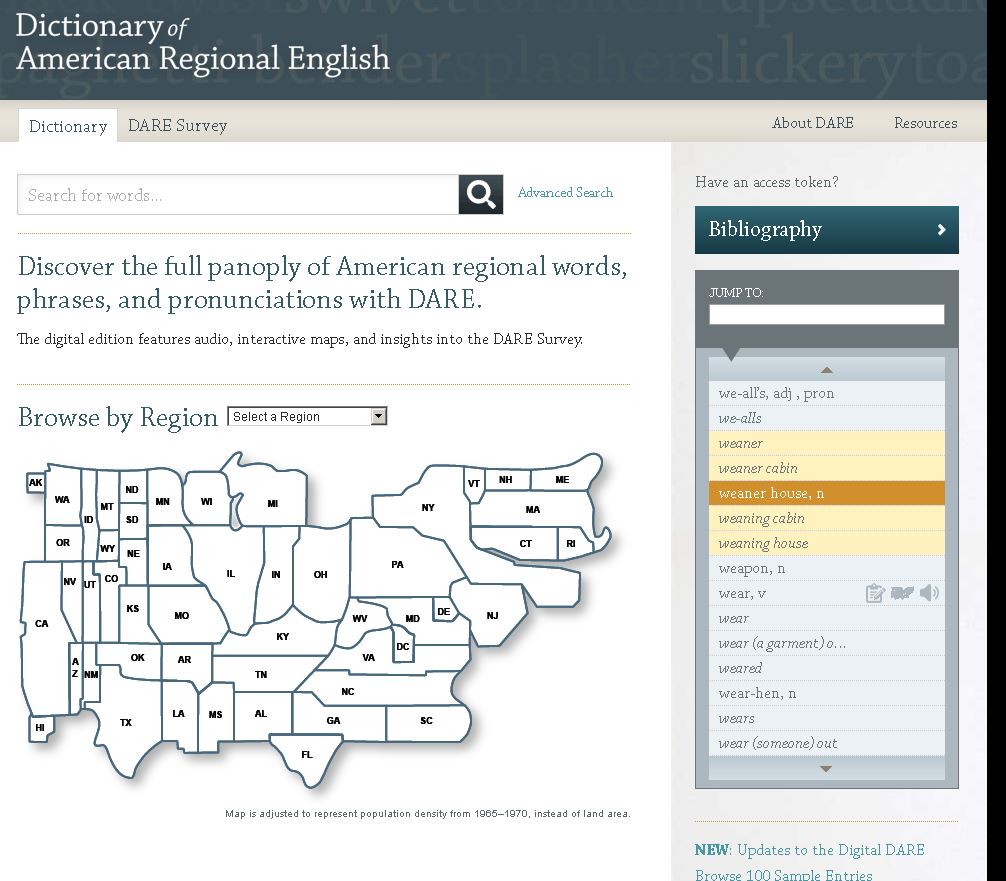